“They didn’t teach me that in theological college – or, did they?” 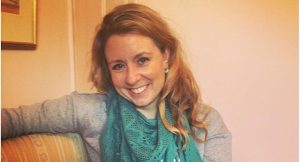 “They didn’t teach me that in theological college – or, did they?”
English Español Français Português

How often do you hear of churches facing building issues? How often do Anglican leaders lament the time they spend facing questions about property? 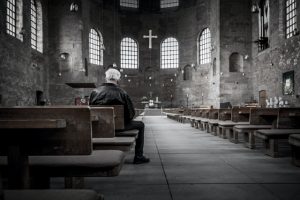 Dioceses shutting down and selling off church buildings?

While owning a church building is a blessing, so often, instead of setting the backdrop for thriving and active communities, church buildings rise to the forefront with their issues and limitations. This is perhaps a western church problem, but it is a problem for many.

A pastor in Canada, Révérend Graham Singh, has taken this issue head on and realised that with a bit of strategy and innovation, even our most problematic church buildings present huge potential. As Rector at St Jax in Montreal, former Executive Director of Church Planting Canada and now Executive Director of The Trinity Centres Foundation (TCF), 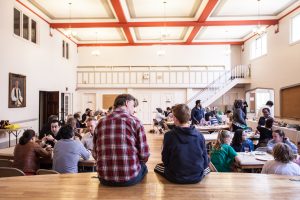 Graham suggests that we can shift to a model in which our buildings are no longer liabilities but community centres, which invite communities back to church, and lead to a reawakening to the presence of God. In particular, Graham has set up TCF, a Canadian charity established to transform 100 historic city centre church buildings into community hubs. Through this charity, a team of professionals look after the upkeep of the building and manage events within it. This provides not only income, but also new leadership capacity, freed up as pastors return to what they do best – mission, evangelism, teaching and connecting with the community.

Through Graham’s experience of planting four churches in England and Canada, and founding TCF, he shares his thoughts in this interview on seeing churches once again become the centre of a community.

At a time when the selling off of church buildings could be seen as the waning of Christianity’s influence in the West, what opportunity do you see for revitalisation?

Soon after I moved back to my native Canada after 14 years in the UK, I jumped into a church planting conference (an instinct I had learned from Bishop Ric Thorpe!). Those attending the conference were, for the most part, operating their churches out of schools and cinemas. I wondered why other denominations that were closing and selling off buildings weren’t attending. This question led to me becoming the Executive Director of Church Planting Canada, where we later brought over 40 denominations around the table to collaborate on many things – including the sharing of resources and buildings.

As a church planter myself of nearly 20 years experience, I have found one of the greatest opportunities to be in the physical places where Bishops have thrown their hands up and said, ‘This thing’s a write off’. At first, they think you’re crazy to take on this place, with its liabilities, even though it might be in a strategic city-centre location. Yet once things get going, and ways are found for using the buildings that enable flourishing, then they come back right and realise –  this could work.

I like being involved in ‘crazy’ ideas – in the sense of that which seems impossible. The license to innovate is a very important part of church planting. I think our Bishops are very keen to give that permission and part of that is to see these key church buildings in city centres rescued. I think we can really shift and transform the culture of the city from these locations. For me, these historic, sacred places are at the heart of ministry. Seeing them come alive for community activity is really at the heart of how I see the Gospel at work. The more we open the doors to things that don’t necessarily look like ‘Jesus things,’ I have seen Jesus somehow, in an amazing way, filling those environments by His Spirit.

I call this ‘partial, temporary de-consecration’ – as we allow groups to use parts of our primary space for secular events.  This eventually becomes ‘co-consecration’. We might or might not have an active role in an event that is held in our space. We recently hosted an event for an Indigenous group and we felt it was inappropriate to have a speaking role during such a time of deep reconciliation between the church and the Indigenous peoples. But by inviting them into our primary spaces as honoured guests, we felt we were communicating their importance to us. 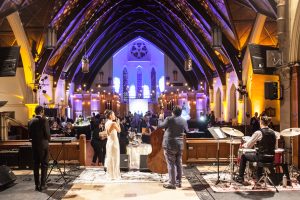 We have seen extraordinary scenes unfold in our space which open up spiritual dimensions and opportunities within secular events. The United Nations World Refugee Day was being celebrated at our church. They were rehearsing for a theatrical presentation about what it was like to get out of Syria and using the lighting within the church to portray the light and darkness of the situation. The 150th year anniversary of one of our national companies was also hosted at St Jax. The vice-president called me up a few days later. He said, ‘I want to talk to you about how I support my staff to have good quality, life-giving relationships.’ This was one of the most non-religious events we’ve ever held. And yet it ended up turning into a Gospel conversation.

So how do you shift and transform the culture through these churches?

Follow the people who are doing the shifting. For example, those who are calling for a completely new perspective on the environment and how we care for it. I look at some of the financial technology, the places that they’re occupying culture, and listen to what they’re talking about. I ask myself, ‘What are they doing? How do they talk?’ 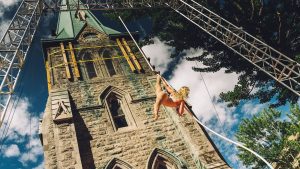 One of the events we host in St Jax is the circus. And when I meet the performers or other parts of the arts community, I realize they have a lot to teach us. It’s out of a place of humility and powerlessness. Out of that place, we can actually tune in to hear what true world changers and city changers are doing right now. It’s a whole new thing and a whole new language to learn.

What role does innovation play in revitalisation?

We use what I call a ‘risk-adjusted community tenancy model’. This model is centred around the fact that we want to reach the community, by renting to a broad range of partners and not only one focus area. We want to do good. We want to have a right focus on justice. 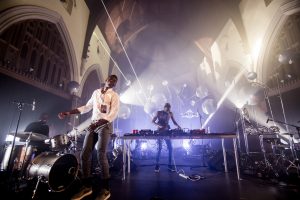 And we are prepared to receive revenue from groups focused on these things to enable them to use our facilities. But I have also found that we shouldn’t put all our eggs in one basket. In a city centre, we can’t only run a homeless shelter and nothing else. Or only facilitate a refugee charity. Or only host a circus company. We can host a mix of types of impact, that can bring in a mix of different types of revenue. This way, we can enable a broader impact on the city, with charities and projects that align with some of our values. And this mix means that when different shocks come to the economy, or to the governance of those individual groups, we are able to adjust our model accordingly should something happen to them.

The church is at a turning point in some parts of the West and, in those places, innovation and strategy are key to adapting and surviving. I was really inspired to discover a cryptocurrency farm using lots of computer servers in the basement of an old church building. Normally what happens with these server farms is that you have the electrical cost of running the computers which is pretty significant, and then the cost of the air conditioning. So in this case, they’re running it in a cold climate and using the heat from the servers to heat the church.  A floor of the church building has been made into a rural agricultural co-op that you can access 24/7 via an electronic check-out system!

But that’s not a Christian enterprise. That’s a business person who bought that church for $1. And that’s what he’s doing with it. Why couldn’t we do that in some of our church buildings? Why couldn’t we have that level of innovative thinking giving solutions for some of the challenges that we face?

Well, actually, we are beginning to see this kind of change, helping churches be creative in this way, alongside the Christian ministry they do already. It’s still a minority solution but they could become more normative.

What innovations have inspired you within the church?

I have learned much from the Church Commissioners of the Church of England, from the United Church of Canada, from some of the Anglican Church Planting movements in different parts of the world and certainly from within my own church family at Holy Trinity Brompton and the Church Revitalization Trust, whose work in this area is second to none. I’ve also learned from churches from other nations when they come to the West. For example, I’ve seen this in the Spanish churches as they are moving into American cities. I came across the first Cuban District Superintendent of a major Methodist diocese in Lexington, Kentucky. He has been planting a whole network of churches while he was still a veterinary doctor. That’s pretty cool. I believe one future of church planting is seeing church planters and pastors become co-vocational like this. 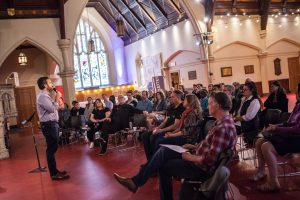 I think we should also really be thinking about another type of innovation which allows the pastor to be most impactful. We look for leaders who are very good at teaching and very good at pastoral care, but also who need to be able to handle complex business problems of heritage buildings with virtually no revenue. This is often a stretch too far. What if we were to say that complex buildings need professional building people. Let’s take that off the priest’s plate. Then the priest can get on with what they do best – teaching and pastoring and proclaiming the gospel and building a team of people who love their local area and prophetically look to the people around them and say, ‘Where is Jesus in this environment?’

Looking ahead, some of the greatest inspiration for me has come from a course I completed recently at the Saïd Business School at Oxford University on Impact Finance Innovation. What if the deep rhythms of innovation we are sensing as church planters is indeed being echoed in the financial markets?  What if revival and renewal could lead to the church creating entirely new financial structures in these areas.  That’s what we’re working on next!

We can all
play our part!